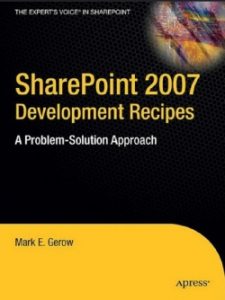 Introduction Welcome to SharePoint 2007 Development Recipes: A Problem-Solution Approach! What you’re about to read is the result of an idea thread that’s been rolling around in my head for several years—the need for a practical guide that empowers and enables developers to leverage the full potential of SharePoint in the enterprise.

■Note Thanks to Microsoft, just about every book on SharePoint 2007 starts out with a note defining the term. That’s because SharePoint can refer to two distinct but closely related products. The first, Windows SharePoint Services (or WSS) is a part of the Windows 2003 operating system (although it must be downloaded and installed separately). WSS, which is free of charge, provides all the core services that you expect, such as security, list management, and web-part support. It’s possible to build very sophisticated solutions just using WSS. The second product is Microsoft Office SharePoint Server (MOSS), which builds on top of WSS, is not free, and provides such features as the Business Data Catalog (BDC), Records Management, Enterprise Search, and much more. MOSS takes WSS to new levels in terms of supporting enterprise use of the Office components. Most of the recipes in this book will work equally well in either environment. I will note where a recipe is applicable to only one of the two, or where some changes need to be made depending on the environment. Early on in my work with SharePoint 2001, I came to view it more as a platform than a product. Since that time, SharePoint has grown tremendously in scope. With SharePoint 2003, we saw the development of robust .NET and web services APIs, as well as a fully thought-out templating model. Just when I thought I understood SharePoint pretty well, the 2007 version was released. One admittedly crude way of gauging functionality is to look at the number of class library namespaces (for example, Microsoft.SharePoint.Administration) in the API. In SharePoint 2003 there were about 15 libraries in the WSS object model. That number has grown to 35 in the current version! Here are just a few of the major new or significantly enhanced features in SharePoint (both WSS and MOSS): • .NET 2.0 web-part support • Auditing • Business Data Catalog (BDC) • Content types • Event receivers • Forms-based authentication